Ah yes, the point in life that I discovered that Aubrey Beardsley and ... oh, some famous footballer of the time (can anybody help me out?) bore a striking similarity to one another (not Peter Beardsley, though he did have a similar haircut I think). There was a football fan living in the flat at the time so these kind of things made some sort of sense. As noted above both Bez and Lurch were also in the vicinity, looks-wise.

Quite excited on Saturday to read nice Mr Philip Ardagh's review of A Boy and a Bear in a Boat, in the Grauniad on Saturday. Good Dog, Bad Dog got no such recognition in print, despite having largely been serialised in said paper before appearing in the DFC and then in book form, so it was lovely to see BBB favourably reviewed in my own newspaper of choice.

Equally lovely was the review on the Library Mice website. I'm particularly interested in the views of both teachers and librarians so kind words from a school librarian are doubly welcome. I've also recently written briefly about my choice of five funny picture books for Library Mice here.

Perhaps best of all though is the report from Storytellers Inc. about taking copies of BBB into schools as part of their Cool Books in School scheme. Some honest reactions from kids to the cover (‘boring, dirty, plain and dull’) but they seem to have been won over by the contents in the end. Huge thanks to Storytellers Inc. for this. It really is very pleasing indeed.

What was I going to do with that plank? 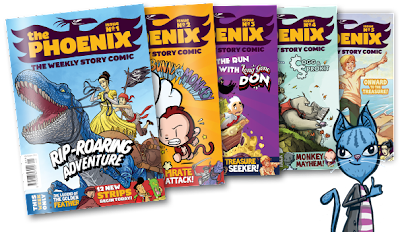 With all of the Christmas, new year, book launch shenanigans (topped by an unhealthy dose of feebly surrendered to coldyness, sniffle) I've rather failed to mention that lovely shiny new children's comic, The Phoenix, launched a little over a week ago. Weekly and crammed full of original comicky goodness (unrelated to licensed properties and tacky merchandising and joyfully free of soon-to-be-landfill items of plastic tat attached to the cover) The Phoenix is a bit like the zombie DFC, risen from its grave (only without the lingering smell of decay). It is a lovely new thing of immeasurable goodness and you can subscribe via the link. Individual copies can also be bought at some independent bookshops and there should be distribution set up at Waitrose stores soon too. Seek it out and consume it. It will do you good.

Oh, and I have a four page story called Ghost Ant in the current issue. You might find it entertaining, especially if you like ghosts. Or ants. Preferably both.

Aha! Some images there that went into another little photocopied mini comic/picturebook type thing, Gerald Goes to Mexico. The nearest thing I've ever done to a road movie. Gerald the cat goes on a crime spree across America. Had a happy ending though, so far as I can recall (which, admittedly, isn't very far at all). Oh, no, wait ... there may have been dynamite...

A few kind words about my book over on Thomas Taylor's blog.

Oh yes, my book came out. I probably should have mentioned that. And done all that hard sell business. Right then. Ahem.

My illustrated children's novel, A Boy and a Bear in a Boat, published by David Fickling Books, came out last Thursday. I think it may be quite good. And funny. I would go so far as to say that I am unusually proud of it. If you were feeling so inclined and wished to buy a copy, perhaps from your local independent bookseller, then I believe you might enjoy it.

Phew. Sorry about that. Back to business as usual now...

Oh, and, happy new year and that.