So, only a week and a bit after it actually happened (and after posting the same news elsewhere...)

I'm not one to crow in the normal scheme of things, and some of you probably have heard already, but I figure this may be my only opportunity to say this, so I'd better say it now:

I won an award!

Specifically, I won the first ever Leeds Graphic Novel Award, voted for by 11-14 year old Leeds schoolchildren and awarded to me for Good Dog, Bad Dog book 1. I'm very pleased, especially as the trophy itself is a bit like a see through version of one of Obelix's menhirs.

And luckily I didn't even get nervous about the awards ceremony because I was absolutely convinced Mezolith was going to win and so there'd be very little attention paid to me. As a result there wasn't much of an acceptance speech (a mercy for all concerned, I'm sure) just a bit of a surprised yelp and a "thank you".

Now I need to decide where to put it...

The excellent Mr Neill Cameron and his brother James (no, not that one) have revived their Unified Review Theory blog after a period of dormancy to take on the worthy task of reviewing commercially available Christmas sandwiches. So if you like Christmas, or if you like sandwiches, or, indeed, if you just like a bit of a laugh, then go here.

Bit of a mixed bag this week but I do like that girl smoking a cigar...

Have I mentioned that I'm going to be at Thought Bubble in Leeds on Saturday?

I'm going to be at Thought Bubble in Leeds on Saturday. 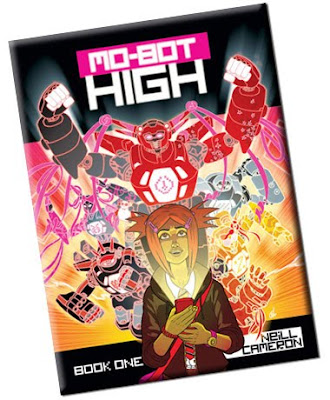 The very first time I met Neill Cameron he loaned me a pen. That's a man I can get on with right there.

That was at the launch event for the DFC back in May 2008. Since then we've run into each other a handful of times and it's always been a pleasure. My experience of people who work in comics in the UK is that they're almost exclusively good folk but even so Neill stands out as especially lovely. It is remiss of me, then, in no small way, not to have drawn your attention already to the release of Mo-Bot High Book 1 last month. The latest release in the DFC Library stable, it collects 80 pages of Neill's excellent tale of giant robots that come out of schoolgirls' mobile phones and beat the oversized, mechanical bejaysus out of one another. I remember reading this week by week in my contributor's copies of the DFC and, gradually being drawn right into the story. Because this boy can write. And, what's more, he can, as a grown man, confidently and convincingly write for a cast of predominantly teenage girl characters. No mean feat. And as for the sinister dinner ladies...

What I'm saying is: here is a very good comic book. Please go and buy it:

Direct from Neill (signed and sketched in).

And you can read an twelve page preview here.

Nothing much to say about these except that I'm rather pleased to look at them again. Must have been having a good day or two.

That's Invisigirl, from Real Lives Of The Superheroes (see last week), smoking a fag at the top of the left hand page. And sitting in one of the ugly chairs in the flat that I lived in at the time.