Lovely Mr Jonathan Edwards has started up Draw Serge!, a blog of drawings of dead French sleazer, geezer and crowd pleaser (and, most importantly, father of Charlotte) Serge Gainsbourg.

Too much of yesterday was spent failing to attain anything resembling a semblance of a resemblance but today this dropped easily from the end of my pen onto a page and I think it's kind of okay. Must have loosened the lid with all of yesterday's efforts. 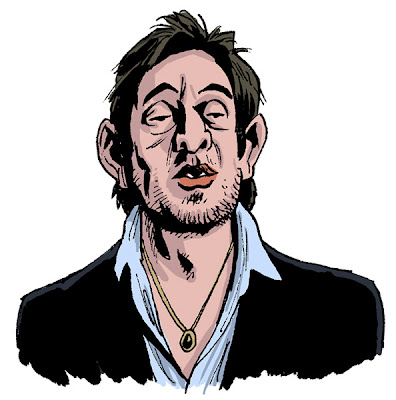 I think some of these were drawn somewhat under the influence of the drawings in John Byrne's Slab Boys Trilogy book. Quite fond of them, despite the decidedly iffy proportions. And drawn, I'm fairly certain, with a Muji fibre tip that wore down altogether too quickly. 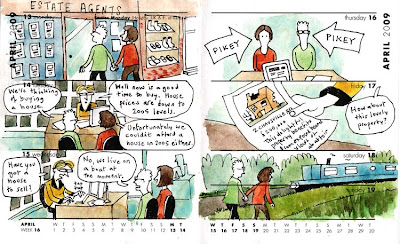 I've been reading Mike Smith's lovely diary stripblog Blogshank for a while now and enjoying it very much. Added value for me comes from his living on a houseboat (which is cool), studying part-time in Cambridge (where I live) and living in Leicestershire (where I was brought up). But this is incidental. The work stands up on its own perfectly well without these connections. Lots of quotidian inconsequentiality nicely depicted (with occasional Big Moments in life too) all warmly related with welcoming humour.

At least that's what he does usually.

Just now he's embarked upon a daily project of a wordless ABC (C is above, as I write he's on D) in an entirely different, much more graphic style that's equally witty and wonderful. Playful, funny, clever, elegant stuff.


A6 Seawhite of Brighton sketchbook number 6, late '95 (possibly heading towards Christmas by this stage)

Still rather fond of Jeremy Fry. Though I do worry that he seems not to have any hands...


I'll be knocking about at the comics do in Bristol next weekend. In particular I'll be drawing for the Draw The World Together charity in the Summit Room of the Ramada hotel for at least some of the time between 2.00 and 5.00 on the Saturday so in the unlikely event that you want to find me and have a chat or get me to draw something quite badly for you then it might be a good bet to try there. Otherwise check the name badges of all the baldy headed four-eyed blokes that you see wandering about (there will be many) until you find me.