There is some deep insight into my working methods over on the Guardian website here. Study closely, my disciples.


Well now, it's been a while, but I return now with some news.

On Thursday A Boy and a Bear in a Boat won the Branford Boase award for best first children's novel. So that was nice.

And, all modest understatement aside, it really was very nice indeed. The Branford Boase is singular among children's book awards (possibly amongst book awards altogether) in recognising the book's editor as well as the author, and so, happily, that David Fickling fella was there, being honoured and feted as is only proper, alongside me. As it's an award for a first novel, no author can win it more than once. But, as an editor, you can win it as many times as you like. So far, David Fickling has liked to win it three times, suggesting that, perhaps, he has something of a way with first-timers. 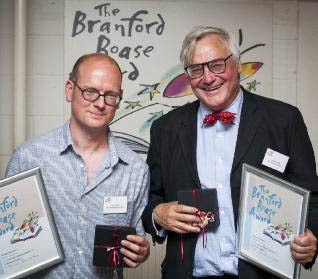 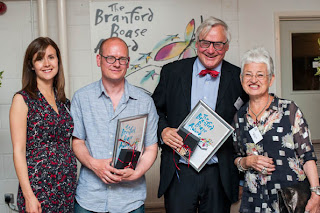 On the left is last year's winner (and one of this
year's judges) Annabel Pitcher,
on the right is Jacqueline Wilson
(as you probably realised).

Despite having to make a speech (which went okay - phew), and have my photograph taken, I had a very lovely time. The winners of the Henrietta Branford Writing Award were all delightful. I signed and drew in a number of copies of A Boy and a Bear for them and for others (which gave me an opportunity to sit discreetly in a corner and hide) including one for Jacqueline Wilson. Blimey. That Philip Pullman fella was knocking about the place too.

I'm a bit late reporting this myself (where's Sarah "Boswell" McIntyre when you need her?), so plenty of others have beaten me to it including: the BBC, the Telegraph, The Bookseller, The Independent and The Guardian,

who, you know, do this kind of thing properly.