I guess I may have been watching Tinker, Tailor, Soldier, Spy around this time.


So A Boy and a Bear in a Boat was shortlisted for the Carnegie medal last week. Which is very splendid and enormously flattering but I won't go on about it too much here beyond saying: Yay! Go me!.

And, (for reasons that are not altogether unrelated to the foregoing) the publication of the paperback edition of BBB has been brought forward to, well, more or less now. It may or may not have a slightly arbitrary official release date attached to it at some point but essentially it's out now. Check your local independent bookshop, national chain or internet retailer of choice (or, you know, don't, because you may not want one, or you may already have the hardback, or you might want to borrow it from the library instead. You're under no obligation).

And the insides look very similar to those of the hardback except that the few colour illustrations that there were are now in monochrome.

But, in fact, on Tuesday night, when A Boy and a Bear in a Boat won it at The Kitschies, it turned out that the Inky Tentacle award looks (for this year, anyway) like this... 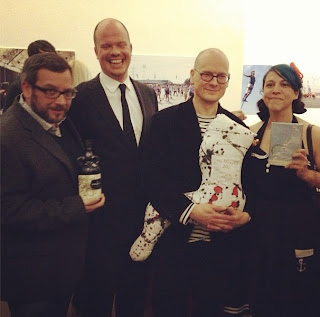 (That's me with the very excellent judges who voted me the winner: Gary Northfield, Ed Warren, and Lauren O' Farrell. Photo courtesy of Sarah 'Boswell' McIntyre, to whom, as ever, very many thanks).

Anyway, heartfelt (if somewhat belated) thanks to organisers Anne Perry and Jared Shurin, sponsors Kraken Rum, and everyone else who was lovely to me on the night. Also, congratulations to fellow tentacle winners Nick Harkaway (red tentacle), Karen Lord (golden tentacle) and the World SF Blog (black tentacle).

I was proper delighted, and surprised, to win. Especially delighted because the cover for A Boy and a Bear in a Boat felt like something of a brave choice at the time. So to have it win an award feels like a vindication of that risky decision, and some small reward for my publisher, David Fickling, for having the nerve to put out a debut children's novel by a pretty much unknown author inside a far from obviously commercial cover.