I slept last night. A LOT. It was very good.

Normally, lately, it's been long slogs working into the night on Good Dog, Bad Dog Book 2. But last night I declared a holiday and was tucked up in bed before 9.00.

Anyway, here's a sneaky peek at a panel from page 11. It's a rare instance of me drawing a car (in fact one and a half cars) and not being entirely horribly embarrassed by the result. Hurrah! 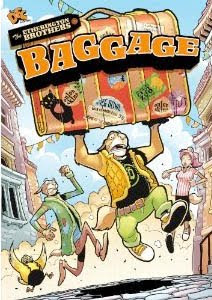 Former and future colleagues the Etherington Brothers have their sumptuous original hardback comicky book (graphic novel, if you must) Baggage published by David Fickling Books as part of the The DFC Library imprint on October 6th. To celebrate this fact they're offering for sale on eBay an original page of Lorenzo's amazingly super-meticulous artwork for the book along with a stack of other goodies here.

There you go: some pirates. Now I don't feel like I've horribly short changed you.

A panel from Good Dog, Bad Dog 2, currently in progress. Should be out sometime next year.

That there Julia Eccleshare of The Guardian has recommended Good Dog, Bad Dog as an example of books "combining humour and strong visuals" here.

Note the accidental Robert Mitchum. This happens from time to time. Most recently (bizarrely) while doodling along to Robbie Coltrane as Cracker.

I'm yet to find a really good joke that begins "So, this polar bear walks into a bar..." There really ought to be one. Closest I've found so far was this back in 2005 (supplied by Vikki Nelson) but the presence of the salmon seems a bit of a cheat.

Oddly fond of that drawing now I look at it. I used to commute to the MA course in Brighton which meant two and a half hours plus each way on trains. I seldom did more drawing than this in all that time (though I did do a lot of staring out of the window which is a severely underrated pastime. Lights on in dark buildings as we pased through nighttime London. Lovely).

I like A L Kennedy's writing very much and seldom more so than in that particular quote: "No one should go to church - take them all to the seaside, do them good". Although sometimes I think the seaside is my church.


The full lineup of contributors to the multi-creator comic Nelson (brainchild of the mighty Rob Davis, edited by Rob with Woodrow Phoenix) can be found here. Be amazed.