The superhero stuff on this spread is the beginnings of me thinking of ideas for a newspaper strip - I think I called it Real Lives of the Superheroes - that I proposed to the Evening Standard. A fellow student on the MA course I was doing in Brighton at the time had put me in touch with the chap in charge of the Standard's comics page who was thinking about sprucing things up a bit with some new material (they'd had Bristow and Marmaduke and a handful of others running for many years without change).

I eventually cobbled together a week's worth of strips (in much, much more than a week's worth of time). The premise was essentially three flatsharing sub-par superheroes more or less living the life of TV-watching and tea drinking that I and my then flatmates Mike and Nik lived only with a bit more flying and invisibility and crime-fighting thrown in. It wasn't a terrible premise (nor, a brilliant or especially original one) but the samples I came up with were badly drawn, poorly written, in no way Evening Standard material and had about one (not especially funny) punchline between the lot of them.

The man from the Standard graciously declined them (for which, in retrospect, I am very grateful). And when I picked up a copy of the Standard on a tube a year or so later I found that the comics page had remained resolutely unspruced. Perhaps it still is.

Yesterday evening. I am in a pub in smelly London attending the launch party for Sarah McIntyre's magnificent Vern and Lettuce book. (Buy it. Buy it now.) I have had some champagne and some cake. I have some beer. Mr David Fickling has given a rousing speech. There is more cake available. There are any number of talented cartoonists knocking about the place with whom I may converse freely about pens should I so desire (and I so do). In particular I spend a good deal of time catching up with me old mate (and sometime Good Dog, Bad Dog colourist) Faz Choudhury. In short, all is very much well with the world.

A man, a woman and a boy enter. The man approaches me in familiar fashion, says hello, says, "This is my wife, Lucia". I think, "never mind your wife, who are you". I smile dimly and take my first opportunity to scuttle over to Faz and John Aggs who inform me of the mystery man's identity. He is a fine fellow who I have indeed met before on one or two occasions and who I had good cause to take proper note of and remember. A little later I approach him, confess my earlier lack of recognition of him and apologise. He is very gracious and we have a brief, very pleasant chat about his work and the failings of Italian government. I feel this has been a good save - a social gaffe tackled head on and turned into a jolly and friendly exchange.

Shortly after I find myself standing next to Kate Brown, creator of Spider Moon, another volume in the DFC Library's first wave of releases back in the spring. I start up a friendly conversation with her and find that she seems strangely more reticent than I remember her. It's almost as if (oh the irony) she can't remember who I am although we've met a number of times before. But she's polite and attentive and I press on. I ask if she's just in London for the day and she tells me that, yes, she'll be catching a train back to Oxford relatively soon. I ask what she's working on at the moment and she tells me a little about her next book, the details of which are unfamiliar to me. I ask her if she knows how well Spider Moon is selling. She hasn't heard the question and asks me to repeat it. I repeat it.

"I didn't write that," she says, and all becomes clear.

She is not Kate Brown.

In fact, look, over there, there's Kate Brown, looking as if she's leaving soon (quite possibly she has a train to catch back to Oxford). She looks a little like the woman I'm talking to. Kind of. If you squint a bit. And stretch her vertically by about eight inches.

Several dry months of further, even more stilted, but profoundly polite, conversation follow in which, I am sure, the poor woman who is not Kate Brown (who is, instead, an award-winning children's prose author of some note) would be perfectly happy for my wish to melt from embarrassment and be soaked into the pub carpet to come true. I cannot recall afterwards which of us first moved away, or how that blissful escape was made, I am only grateful that somehow the whole ordeal is over.

Of course, quite probably, I'd met her sometime before and just don't remember.

Full details of the six nominees for the inaugural Leeds Graphic Novel Awards are here.

This sea monster is surplus to requirements so I'm bunging it on here... 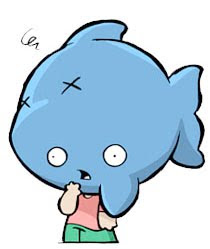 So Sarah McIntyre's Vern and Lettuce (see previous post) began life in the DFC (also the home to my Good Dog, Bad Dog) as a strip that I thought looked pretty but didn't really amount to much. I changed my mind about it in no time at all. It got better and better and my initial reaction got wronger and wronger until V&L became my favourite thing in the DFC by some distance.

Then Fish-Head Steve by Jamie Smart arrived. It was manic, mad and madly inspired. It was strange and original and full of an incredible verve and energy. And it was hilarious. I really hope it makes it into book form as a future DFC Library release.

Now, that's a really enticing prospect in itself but now you can also salivate at the possibility of Fish-Head Steve the animated series...

See the trailer pitch here and hope and pray and make sacrifices to the gods or devils of your choice in the hope that someday it will come to pass.

You should all buy this: 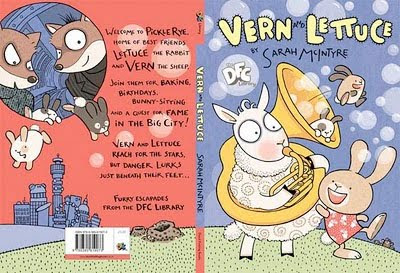 Preferably from your local lovely independent bookshop or comic shop or Forbidden Planet (here) who have been splendidly supportive of all things DFC-related (ta very much). Or if you want to take the Amazon route then that's over here.

Vern and Lettuce is a wonderful strip, warm, funny and beautiful, and you should all own this book. Buy several copies each. Give it to your friends. Give it to strangers (who will then instantly become your friends).