Ms Larusdottir back again, as if you needed telling.


I have a bit of a problem with moths in my flat. They appear to be the kind that eat clothes and my wardrobe is shabby enough to begin with* without their help, thank you very much. Admittedly they haven't yet eaten any of my tatty habiliments, so far as I can tell, but still, I would rather they weren't around. Thus, most mornings I patrol the flat and inflict death by hoover on all the little bastards I can spot. Then mid evening a new batch appear, seemingly from nowhere, and I see them off the following day. As I can't find any sign that any of my clothing is infested I began to suspect that the carpets might be the problem. A friend mentioned that, clothes moths preferring darkness to light and being fond of dirt, sometimes take hold beneath items of furniture that haven't been moved in a long while. Thus it was that I decided to take a look under my bed for the first time since I moved in, just short of two years ago.

My bedroom is small and contains a double bed and a wardrobe. there is just enough space to move the wardrobe a wardrobe's width away from the wall and inspect the carpet beneath. The bed cannot be moved a bed's width though so I decide to take it apart. I upend the mattress against the wall. The base is in two pieces, each on wheels and containing two drawers. It's now possible for me to flip the nearer piece of base onto the other and thus create a doubledecker, easily wheeled stack that will enable me to hoover the carpet and look for any obvious signs of moth infestation. I have no idea what these might be, obviously. I guess I'm looking for a big gaggle of moths, maybe sitting around playing cards and looking round at me, startled, and saying "scarper, boys, we've been rumbled". You will be amazed to learn that I find no such thing. However, in turning over the one half of the bed's base I have revealed something interesting. The bottom of the bed is a kind of gauzy nylon fabric and I can see that between this and the two drawers are a number of newspapers. Closer inspection reveals them to be copies of The Church Times. I do not read The Church Times. My friend Rebekah, who lived here for some years before me, does not strike me as a likely subscriber either. Therefore it seems reasonable to assume that these papers have sat between the drawers and the bottom of the bed for at least half a dozen years. Do moths like newspapers? I don't know. But it seems a reasonable precautionary measure to remove them. I get the drawers out of the base, reach in and extract the papers. There are a dozen or so copies of The Church Times and assorted similar titles dating from 2000 to 2002.

There is also a copy of Julie At The Reformatory from 1998.

Make of that what you will.

*My attitude to clothing is that if I buy stuff new with no regard to fashion and wear it for many many years it will eventually become "vintage" and thus make me "cool" and "retro". At the age of ninety three probably. 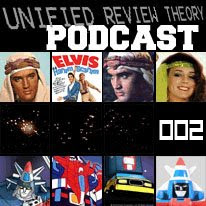 Erstwhile DFC contributor and generally lovely chap Neill Cameron and his brother James have put their second Unified Review Theory podcast online and, once again, they entertain the listener (and clearly themselves also) admirably in their continuing quest to review EVERYTHING (and give it marks out of 10).

The fellow on the right hand page with the several deformities inflicted upon him by very poor drawing is me old mate Mike Irwin. I can't remember if the robot on the opposite page shared a flat with us at the time or if I just made him up.